As we are far past the first half of the current year, this report investigates the main disinformative trends circulating between January and June in France, Germany, and Spain. These are the countries whose fact-checking activities the EU DisinfoLab currently monitors and analyses according to its original methodology, detailed in a technical document.

The paragraphs below will show common cross-national patterns – as hoaxes and conspiracies proliferating online overcome borders to insinuate multiple languages, platforms, and communities – as well as country-specific narratives.

Overall, the pandemic started as the predominant event exploited by malign actors at the beginning of the year, but it later lost its traction after the Russian invasion of Ukraine unfolded. Disinformation around the war peaked during the initial months but then started losing momentum as public attention on the matter decreased. In addition to international events, domestic occurrences like the presidential election in France, or regional ones in Germany and Spain were assimilated into the disinformation landscape.

Despite being marginal until now, we will keep under scrutiny the events that will likely make the headlines in the following months, and become targets of false news, from the monkeypox outbreak to climate change and energy-related concerns.

The French disinformation landscape from January to June 2022 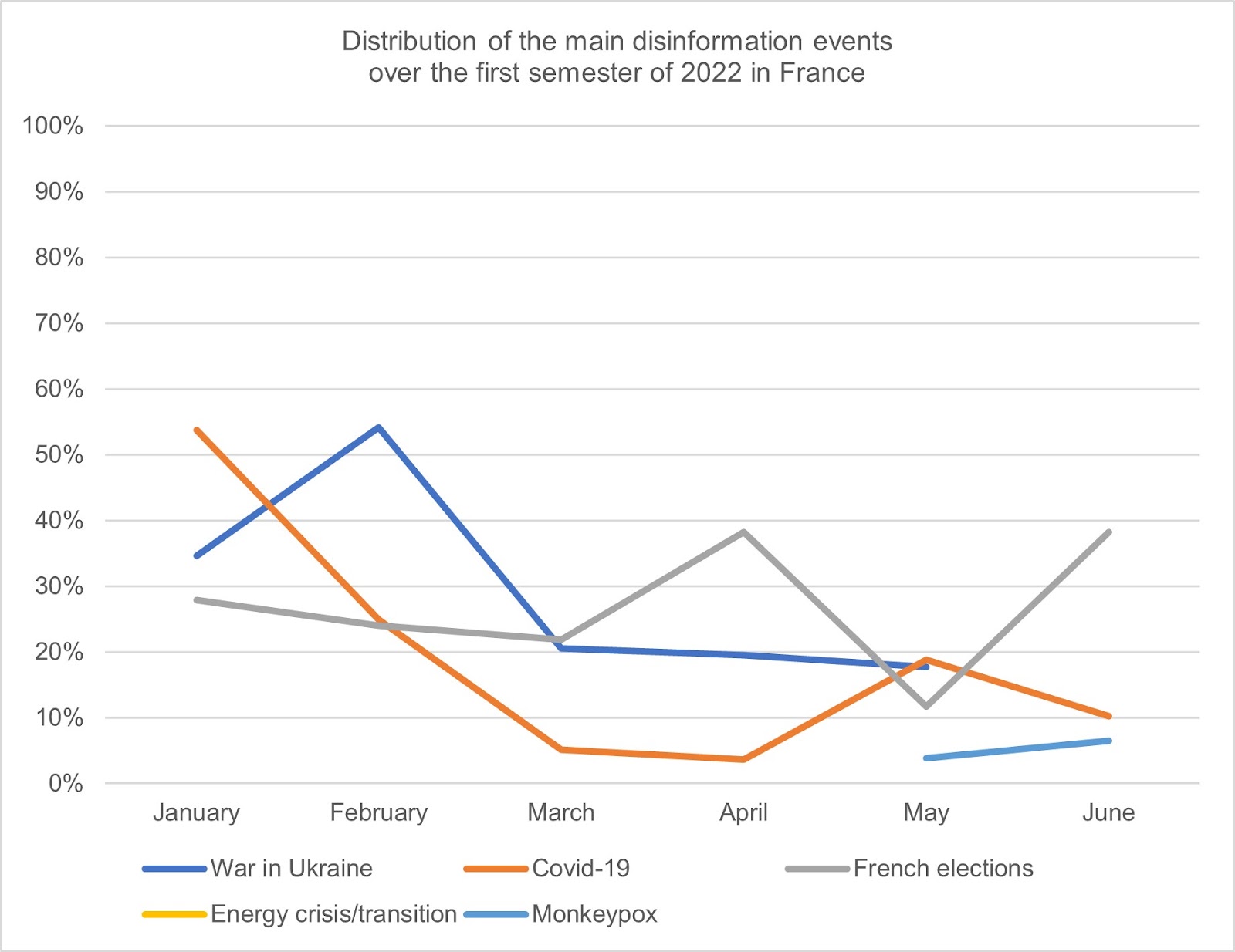 Other deceiving narratives included denialism (e.g., saying the Mariupol maternity hospital victims were fake or blaming Ukraine for “bombing its own people”).

Anti-refugee sentiments were fuelled by claims that Ukrainians fleeing their country would receive special refugee status or a quote falsely attributed to Macron saying Russian sanctions would lead 60 million refugees into Europe. 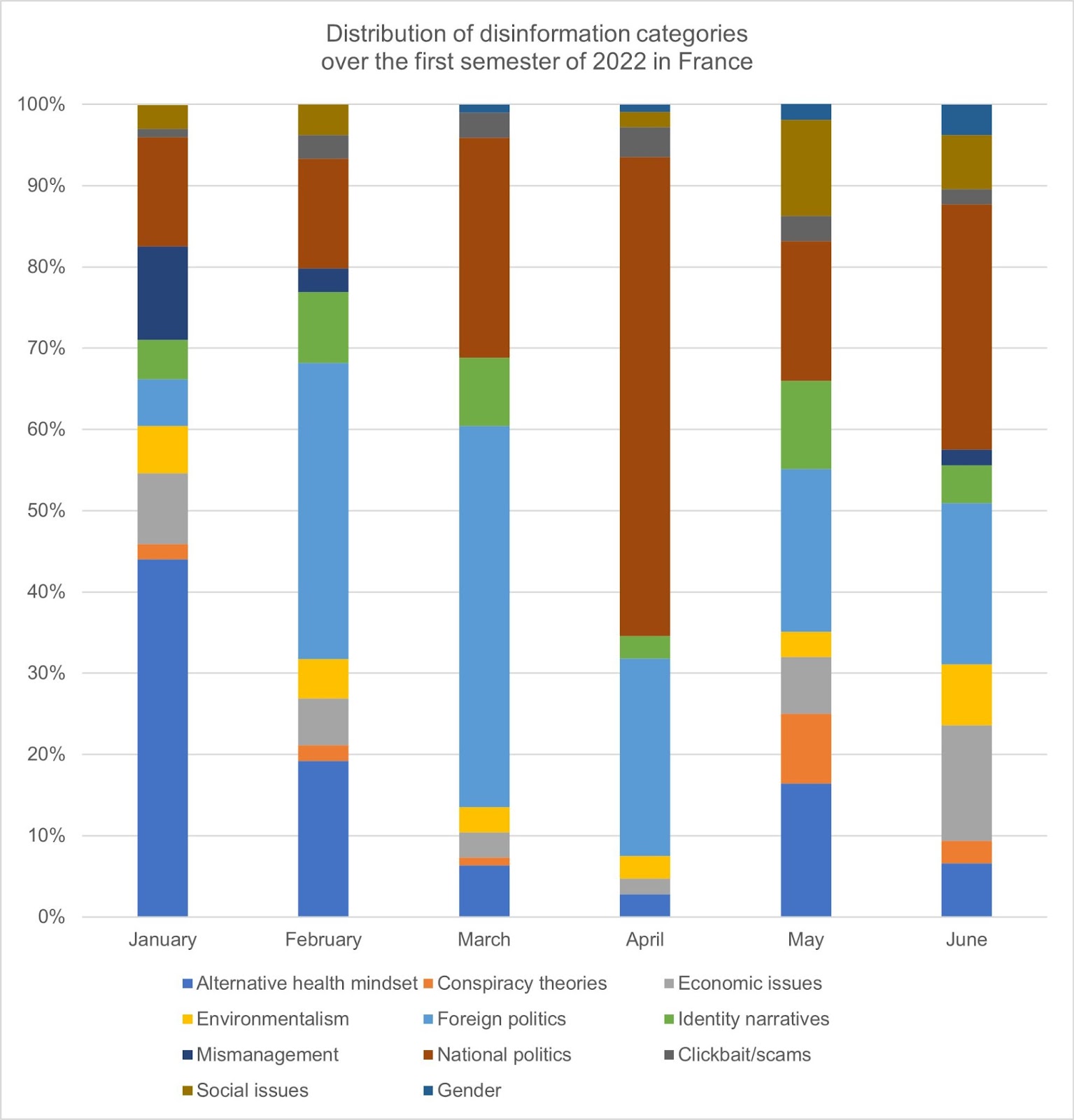 The German disinformation landscape from January to June 2022 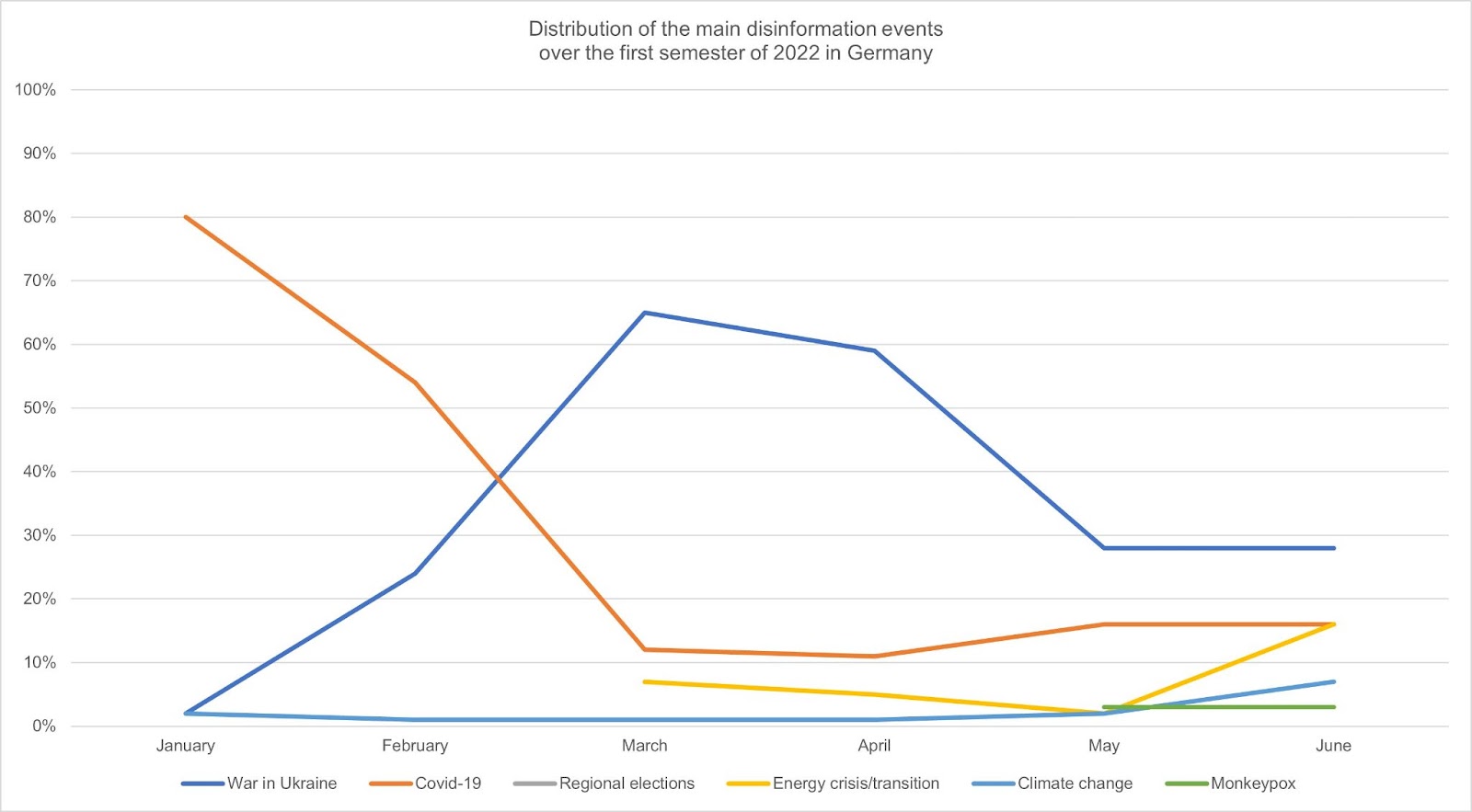 Ukraine-related narratives have soon evolved to affect other countries, such as Finland, Poland, Austria, and Germany. The war offered a pretext to trigger political polarisation and institutional distrust in Germany, criticising the assistance given to Ukraine or attacking government members, such as Green party ministers Robert Habeck and Annalena Baerbock.

Refugees were targeted by numerous hoaxes, portraying them as criminals or exaggerating the benefits they receive compared to other refugees or even nationals. Fear-mongering narratives, Nazism accusations against German politicians, and conspiracy narratives completed the landscape. 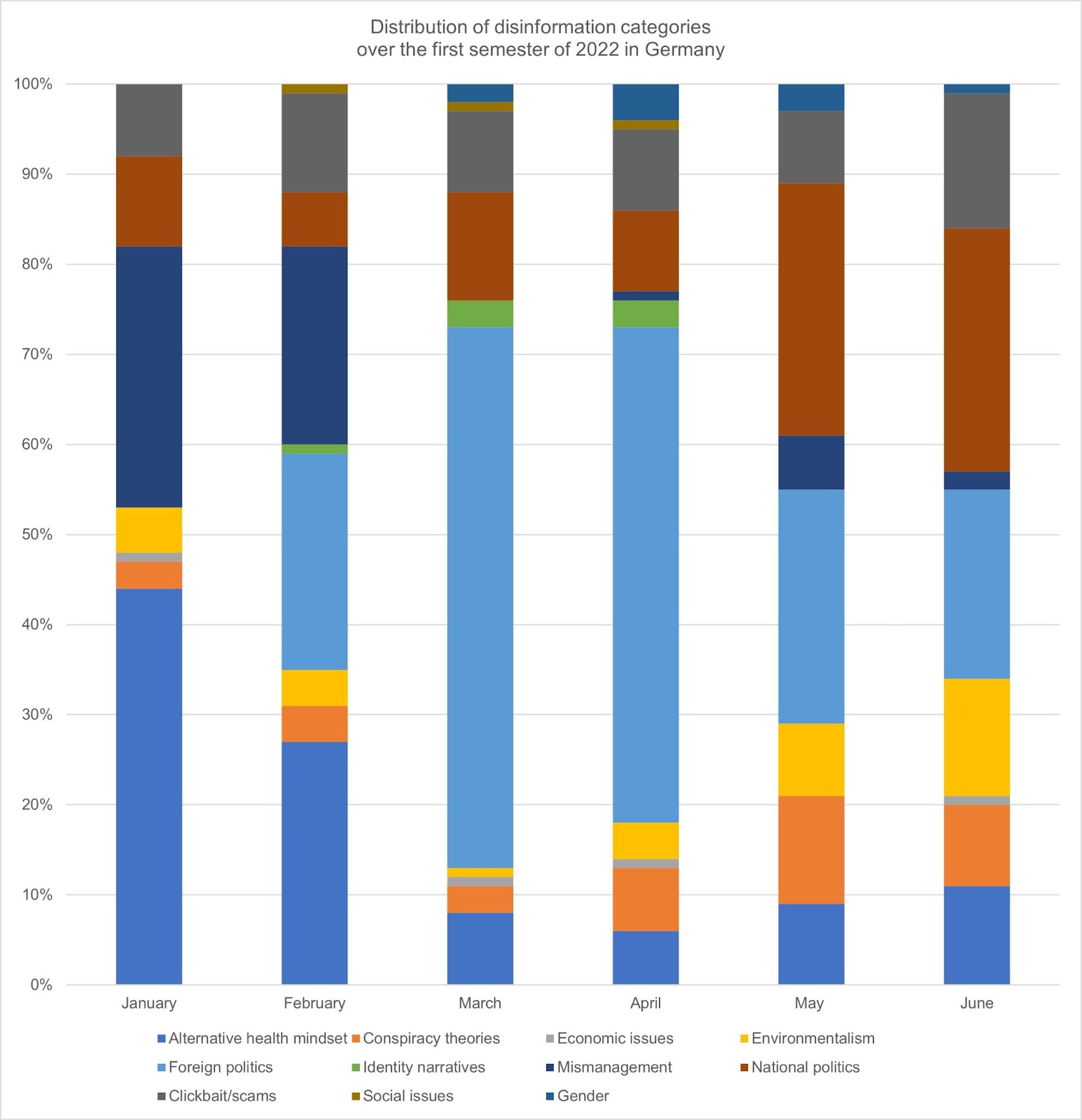 The Spanish disinformation landscape from January to June 2022 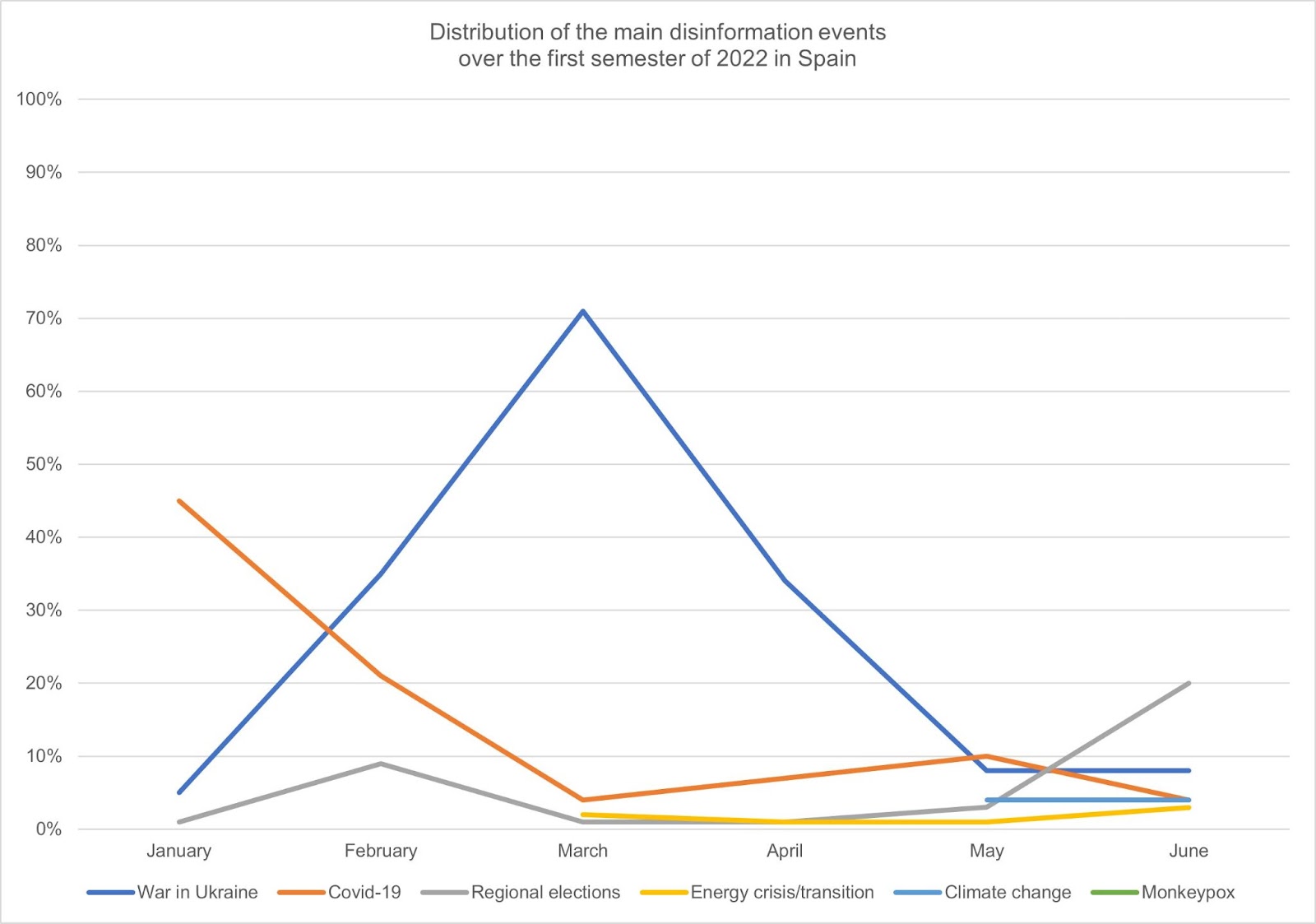 Anti-LGTBI narratives exploited a bill on transgender rights, the monkeypox, and the abovementioned Texas school shooting. 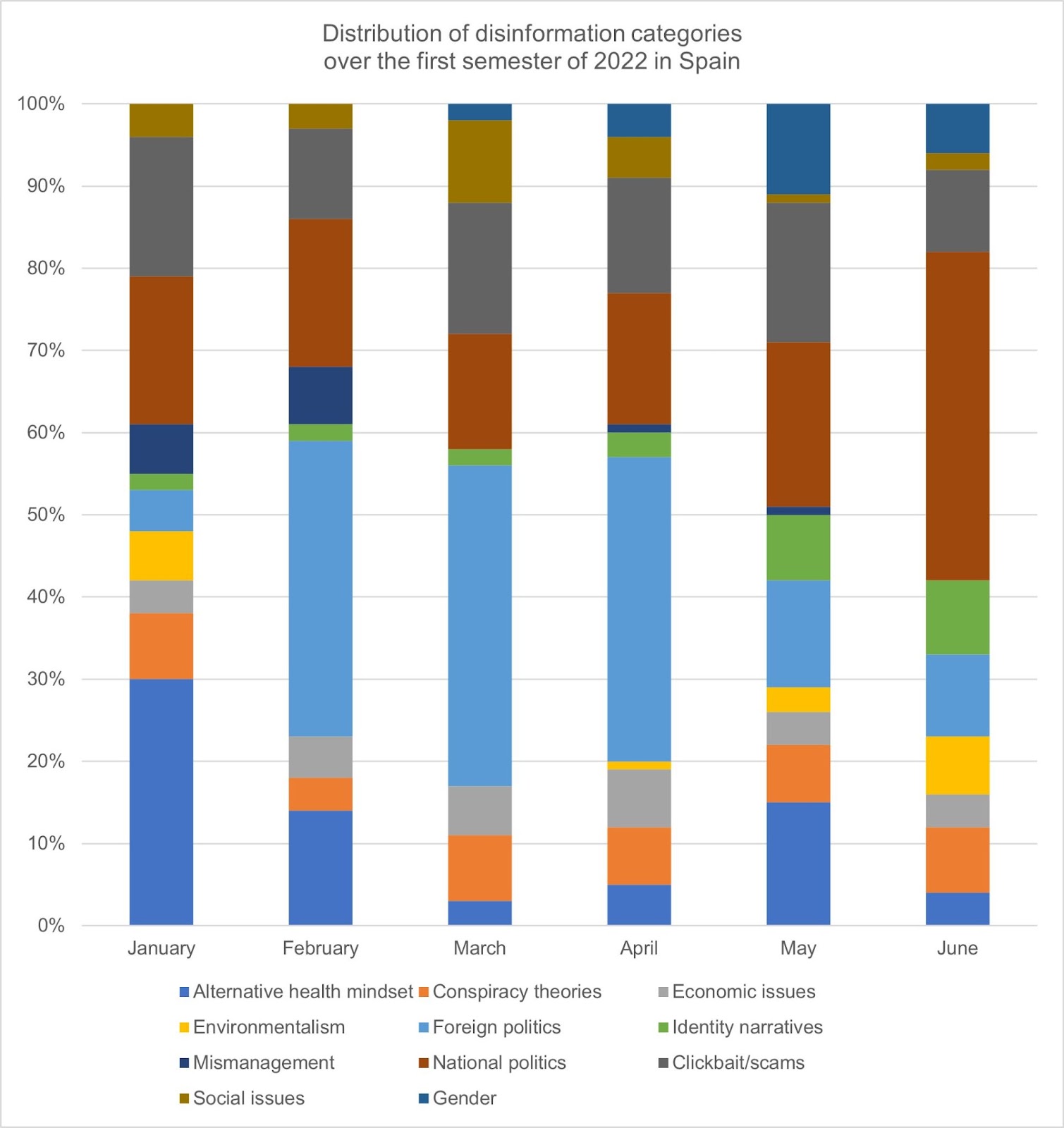 After two years in which the Covid-19 pandemic has almost monopolised the information sphere, the past semester has seen a shift of attention towards the next crisis. The war in Ukraine became the most popular event around which to disinform, but it has lost quite soon the interest of the public despite the continuation of the conflict.

In the context of rapidly evolving global crises, common disinformative trends emerged, from anti-vax conspiracies to pro-Russian hoaxes. A remarkable technique that was identified by fact-checkers in France, Germany, and Spain consisted of the Western media to fuel distrust against democratic infrastructures.

Besides the monkeypox outbreak or the summer heatwaves, other topics and events contributed to the information disorder, although we did not mention them in this report. For instance, the Deep v. Heard trial, the Eurovision context, or major sports events were instrumentalised to spread false and inaccurate content – evidencing the interconnectedness of disinformation across Europe.

Designed and Coded by Fastlane

This website uses cookies to improve your experience while you navigate through the website. Out of these cookies, the cookies that are categorized as necessary are stored on your browser as they are essential for the working of basic functionalities of the website. We also use third-party cookies that help us analyze and understand how you use this website. These cookies will be stored in your browser only with your consent. You also have the option to opt-out of these cookies. But opting out of some of these cookies may have an effect on your browsing experience.
Necessary Always Enabled
Necessary cookies are absolutely essential for the website to function properly. This category only includes cookies that ensures basic functionalities and security features of the website. These cookies do not store any personal information.
Non-necessary
Any cookies that may not be particularly necessary for the website to function and is used specifically to collect user personal data via analytics, ads, other embedded contents are termed as non-necessary cookies. It is mandatory to procure user consent prior to running these cookies on your website.
SAVE & ACCEPT